So, we have a circle divided into 336 Zeps, and we can use ⌜ (“angle”) as a symbol. This character is not used for much else, being technically a “crop mark” (U+230C, BOTTOM RIGHT CROP) and so unlikely to be used in a context where angle measurements are discussed, like a maths equation. 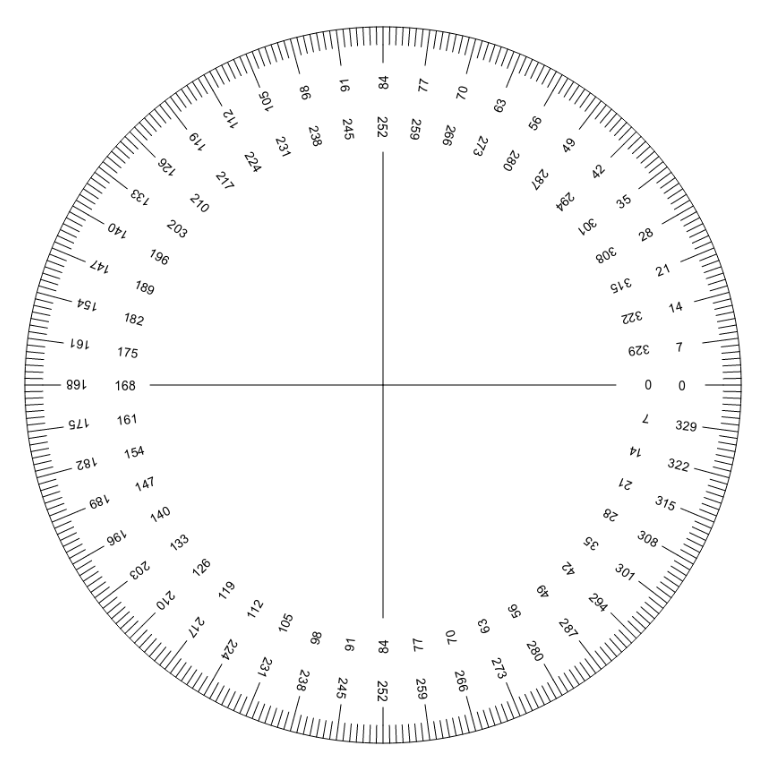 I have no proof that anyone every used such a circle division, and Google does not find any references to any such division, but still….

Okay, the Babylonians used base 60 for their numbering system, and came up with the concept of dividing a circle into 360 parts. Historians and mathematicians have speculated on why 360, best answers are that 360 is “super-abundant” which basically means it has lots of divisors, i.e. you can slice the pizza lots of different ways, like half, third, quarters, sixths, eighths, tenths, twelfths, etc etc, and that 360 is close to the number of days in the year.

Things become interesting once you consider what I propose were the original definitions of the parts of the cubit, presented here as based on tau {\color{purple}\tau} rather than pi {\color{red}\pi}. The values are mostly from Wiki’s page, which I contend date from classical Egyptians rather than original Zep Tepi time.

As you can see, there is a very nice one-to-one mapping between the formula using tau, and the divisors of 336, except for the “awkward” ones of the hand and remen.

This correspondence enables us to do something like this:

1. On a large slab of stone, mark out a circle with radius one metre.
2. Carefully cut this out.
3. Then use a long strip of linen or papyrus, and wrap it around the edge of this large stone wheel. Carefully trim it to be the exact diameter.
4. Then we can simply divide this into half by folding, then into half again by folding again, and then into thirds by first cutting this quarter circumference (giving a piece that is one quarter tau in meters), then folding this into thirds. That will give us a Royal Cubit.
5. This cubit can now be divided into 28 digits (which is left as an exercise for the reader 🙂 )
6. Using the length of the digit, the entire cloth length can be marked off in digits. This can then be transferred back to the stone circle, conveniently dividing it into 336 zeps.

The point I am trying to make is that there is a one-to-one correspondence between zeps dividing a circle, and digits dividing the cubit. It is this potential correspondence which led me to the idea of the zeps.

Now let us consider some of the other advantages of a circle divided into 336 instead of 360.

The difference comes when you try to divide a right angle into smaller parts.

Which means that both can divide a right angle into 3, but only the 84 can also divide it into quarters.

Similarly if we take half a right angle, which is 45° or 42⌜ then the divisors are:

It is also important to note the historical importance of the number 7 to various cultures over the ages. 336 allows division by 7, whereas 360 or 400 or 256 does not.

336 = 12 x 28, and both of those numbers were important to whoever built the pyramids and came up with the cubit. 12 x 28 can also be interpreted as 12 (typical) female cycles, or being close to 12 lunar cycles.

Converting between degrees and zeps is quite easy:

I have tried to find “proof” or justification for the use of a 336 circle at Giza, but so far no luck. Neither the alignments between the pyramids, or the angle of the slope of the pyramids or of the tunnels offer anything convincing. Perhaps something obvious will eventually surface.

So at the moment my only motivation is the divisibility, and the potential alignment between zeps and the digits on a line created by rolling a one-metre radius circle one revolution. Which may be enough.

Changelog:
2019-01-14: Initial version
2019-01-19: Replaced three backticks ‷ symbol with simpler “angle” ⌜ symbol. The backticks can be misread as being part of a degree-minute-second progression, and when hand-written may be messy. Also depending on font size and face, they don’t always display nicely.