This is not original research, I’m just republishing results found by others, because I find it excessively annoying (as in: This should not be so.) and need to get it out of my system.

We start with the location of the Great Pyramid, thanks to Google Maps (or Earth). 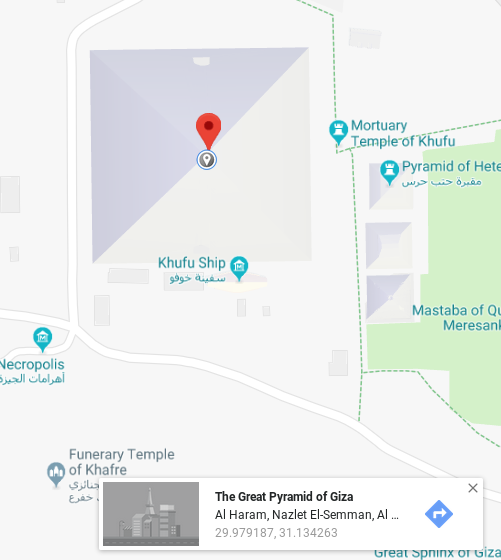 As you can see, the latitude (degrees north of the equator) is 29.979187°, depending on exactly where you click on the top, the “187” changes slightly, but the above is good enough for our purposes.

As you can see, that’s very close to a multiple of the latitude of the pyramid.

But that’s just a co-incidence, you say. Just a fluke, albeit a big fluke. It presupposes that the builders knew not only the metre, but the second, and could measure or know of the speed of light in those units (as opposed to, for example, 186000 miles/second).

So like an over-confident magician, they did it again.

We draw a circle inside the pyramid (touching the inner walls) and one outside (touching the four corners), as follows (which is slightly badly drawn, possibly Google’s rendering has put the centre slightly left, but you get the idea.): 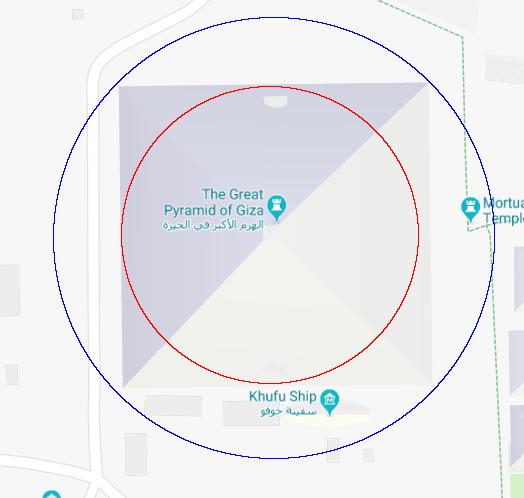 Now each side of the pyramid has a designed length of 440 cubits.

For the circumference of the blue outer circle, we first calculate the diameter using Pythagoras:

Now we subtract to find the difference.

Now the magician pulls the rabbit out of the hat, by converting to metres (x π/6):

So you really need to wonder if someone was trying to send a message ….