According to the historians, the cubit is an ancient measure based on the length of the arm plus hand, like this:

where the normal cubit is 6 palms long, and the Royal Cubit 7 palms long. Well, that’s one explanation of the origin. The other is that they got it from the gods, a long long time ago.

Now there are several problems with the common cubit as shown above. In the first place, it’s generally accepted as being 17.6 or 18 inches long. That’s 44.7 to 45.7 cm.

The first problem is that the ancient Egyptians were too short to support a length that long. While there is “some” correlation between height and length of forearm, it is known to vary by population group (according to modern research), e.g. the ratio between height and forearm length for Malaysians is different for Icelanders. However I suspect the differences may be more to do with somatype rather than “population” per se. Be that as it may, a little informal research between myself and a colleague who shares the same body type, but is much taller, produced this:

Now how tall were the ancient Egyptians? Consider:

So Rameses was relatively tall amongst his people, basically the same height as me. But the cubit is much older than his period, dating from a time when the average height was under 170 cm. This makes a length of around 45cm for the normal cubit a bit problematic.

Things get worse when we look at the royal cubit, which has also been described as being the length of the king’s forearm and hand: 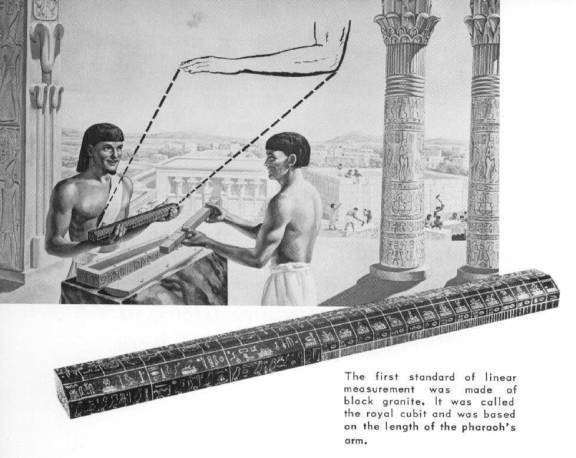 If we try the other approach, of taking a normal cubit of 18 inches and adding on a palm, it STILL does not work … because then his palm would have to measure only 2 inches (5 cm) across, making him a midget, and then his forearm is not going to be 18 inches either.

So, where does that leave us?

2. I suspect that the length was back-engineered to a body part as a convenient way to refer to it, rather than the length being based on the body part itself. Consider for example the foot of 12 inches. If your foot is 12 inches long, you would wear a size 15 US or 14 UK shoe, at the very upper end up the normally available sizes. So I think it is unlikely that that was the common shoe size when the foot came about, but calling it a “foot” was convenient rather than saying everyone’s feet were that long.