Changelog is at end of part 3.

The Giza plateau is one of the most studied places on Earth, while curiously some parts remain off-limits and unexplored. Various people have studied both the pyramids themselves, and the layout of the site, in great detail, which led to various different ideas about the site plan, which are summarised/detailed here:

1. The Orion alignment: https://en.wikipedia.org/wiki/Orion_correlation_theory
2. The Cygnus alignment: http://www.andrewcollins.com/page/articles/Cygnus_Orion_Giza.htm
3. A possible method of how it was planned: http://members.home.nl/peregrine/The%20Geometry%20of%20Giza.html
4. Another way of drawing the site: http://www.vejprty.com/gizaplan.htm
5. Another analysis: http://home.hiwaay.net/~jalison/Art3.html
6. Online book with analysis: https://www.greatpyramidexplanation.com/en/index.html
7. Edward Nightingale’s analysis: https://grahamhancock.com/nightingalee1/
8. Golden ratios on the site plan: https://www.goldennumber.net/great-pyramid-giza-complex-golden-ratio/
9. [placeholder for another site with lots of maths, can’t find at the moment.]

I’ve done some analysis of my own, kicked off by looking for phi circles/arcs, which I learned about when I watched a documentary about the Nebra disc…

which I found fascinating. In particular (for the purposes of this post), the strange curved line at the bottom, which has been shown to be the arc of a circle after it has been divided in the golden ratio phi φ, 1.6180339887…, which for our purposes we will use 1.618 and the inverse, 0.618 as being close enough for practical purposes.

When we divide a circle in the golden ratio, we get two arcs. The red arc b corresponds to the golden arc on the disk. When I saw that I was reminded of the “kink” in the alignment of the pyramids at Giza, and wondered if that angle could explain the kink.

No, it does not. But I’m stubborn and played around a bit, and eventually found where it was hiding. Then one thing led to another and soon I had found multiple angles related to famous irrational numbers, including π, φ, √2, √3, √5, and more…

But before we get to the Film At Eleven, I suppose a disclaimer or two is necessary:

Just a note on my methodology: there’s basically two ways of doing an exercise like this:

1. Measure every possible angle, then go and look for something that correlates to it. This is the sort of process that will have people measuring the diagonal of a wall in the Queen’s Chamber using Pyramid Inches, then claiming that it correlates to the average distance between Pluto and Uranus, thus “proving” that the ancient Egyptians knew about those planets and their orbits.

2. The other way is to think about what number and ratios are important mathematically, and then see if they are to be found in the layout. This is the approach I followed. I’m not claiming that the fact that there are in some cases very good matches (e.g. for φ or √7) proves anything,  but the sheer number of well-known and important numbers should give one pause for thought. Achieving so many on such a limited design (three pyramids) (as well as the beautiful symmetry for some ratios) takes some doing….

3. After much thought (see changelog) I decided to retain the current methodology of measuring the angles with respect to N-S and E-W (i.e. the Cartesian plane) rather than “along the edge of the pyramid”, and adjusting for the skewness of the pyramids themselves. This is partly because most measurements can be made in both directions, so which pyramid skewness do I use to adjust with? I will leave the debate about this to others with more knowledge. The only exceptions were for those angles measured with a baseline on the diagonal of a pyramid, in which case used the actual angle rather than 45°, they are very close to 45° anyway.

Okay, with that out of the way, let’s let the pictures do the talking. The diagrams are meant to illustrate the angles involved rather than be pin-point accurate in the measurement. Exact numbers are given below each diagram.

First up, is phi: Of course, due to the magical qualities of Phi, the above also has φ²: 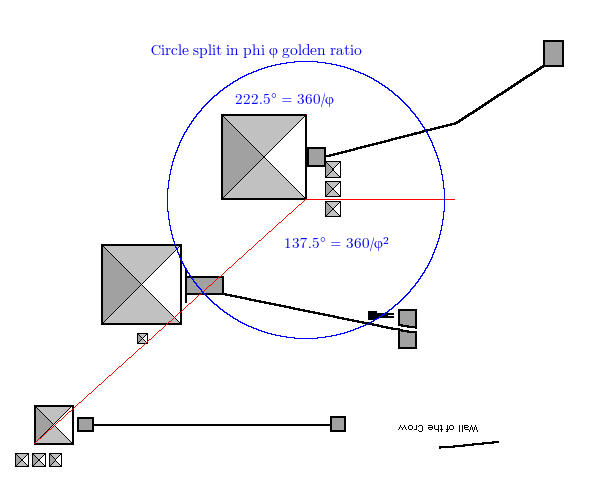 The accuracy is clearly the same as for φ.

Apparently φ³ was also important to the ancient Egyptians (regret have lost link where I saw that), and here it is. The problem is that angles close to 90° are tricky to find. 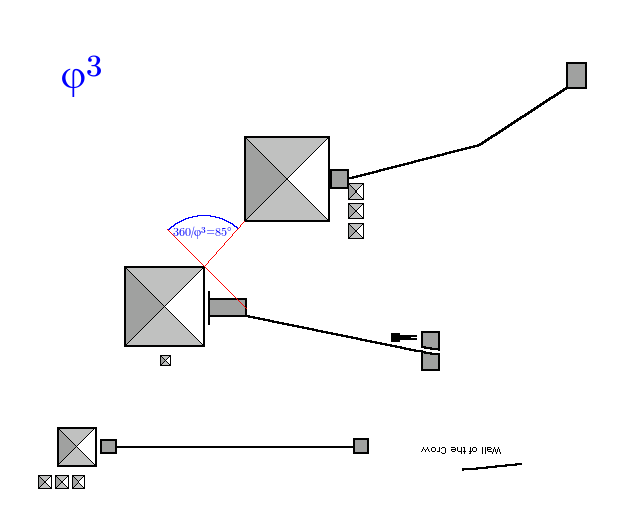 Now since phi is what successive terms of the Fibonacci series tends to, we should also look at the Reciprocal Fibonacci constant (3.359885666…. ) which is designated psi ψ: φ and ψ in Giza plan

As per, for example, the analysis by Samuel Laboy, √φ was important and used in the construction of the Great Pyramid. Here it is in the plan: 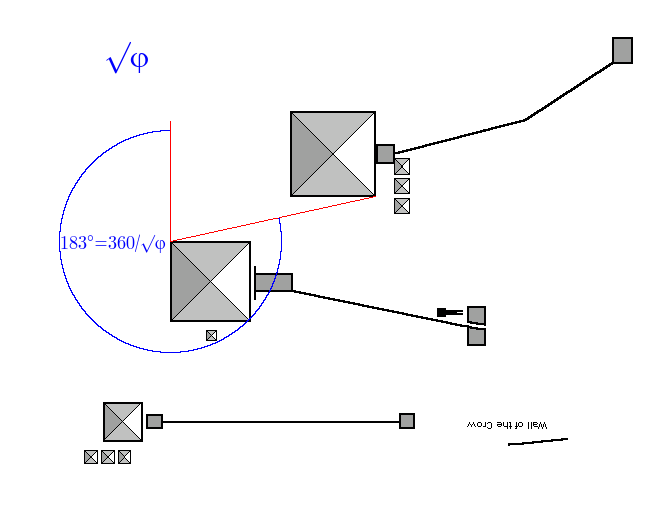 And if we compare φ and √φ: 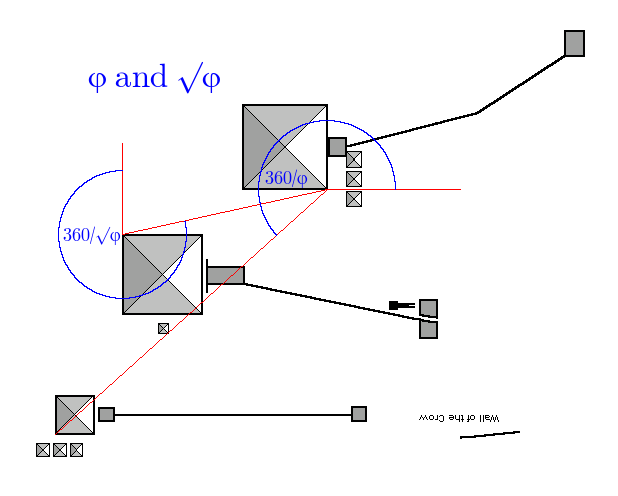 φ and √φ in Giza plan

I could originate them both from P1 Bottom Right but the drawing will be a bit messy. Staying with circle ratios, there is a school of thought that contends that a better “natural” circle ratio is circumference/radius, named tau τ, which is equal to 2π, (6.2831…). You can read more on The Tau Manifesto.

We can find tau here: And when we put all three together … I suggest that, given it is π, φ and τ that we are talking about, and the connections between the three pyramids above, that it would be difficult to argue that this is a random fluke. So if it is not a co-incidence, then it must be by design….

And then there’s π/φ … which provides the answer to “what is the angle joining the top right to the bottom left” …. 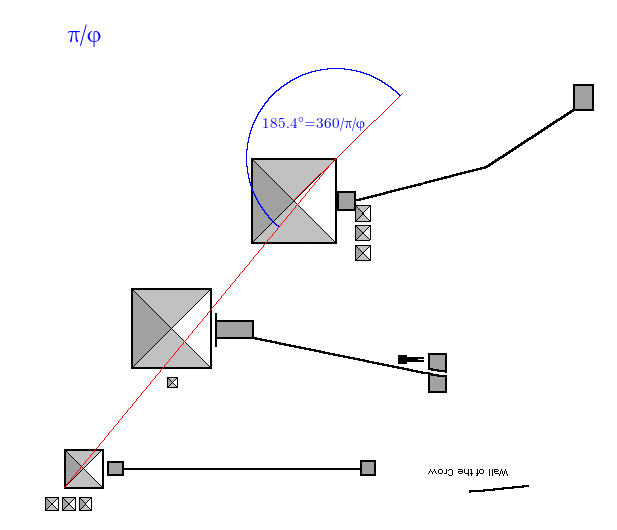 Which leads to this happy construction: 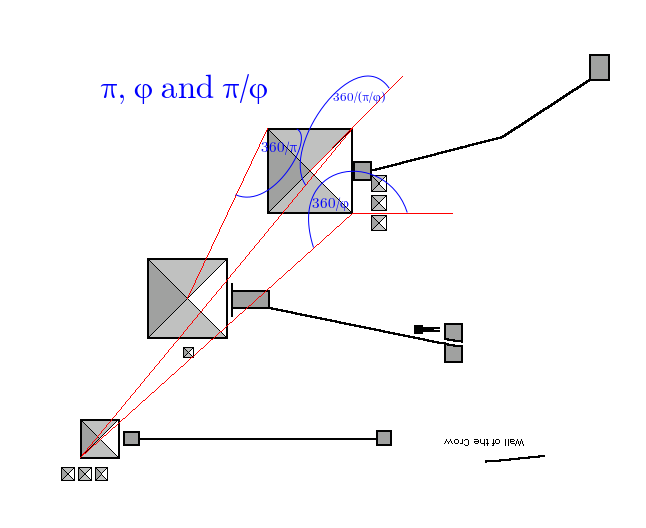 We’ve already looked at the Golden Ratio φ. The other two (Silver and Bronze) are also there: 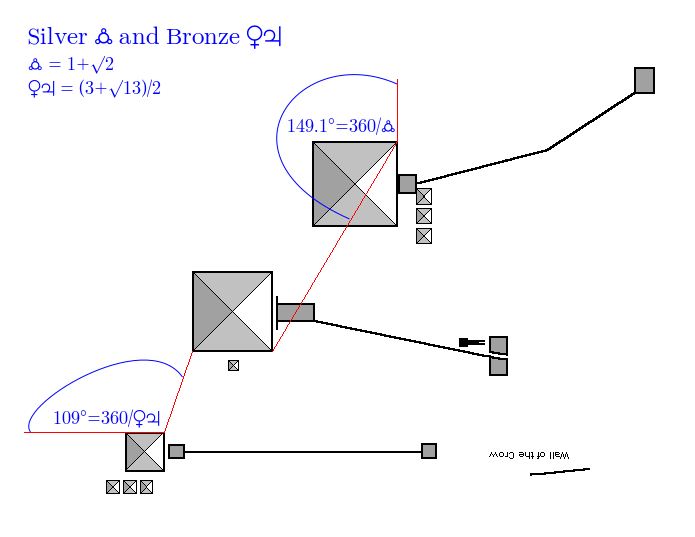 And adding in Gold… 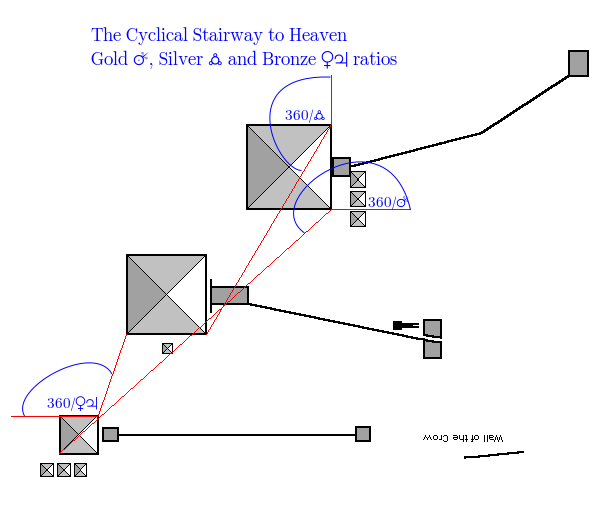 If you can’t see the Stairway to Heaven, here is it highlighted: 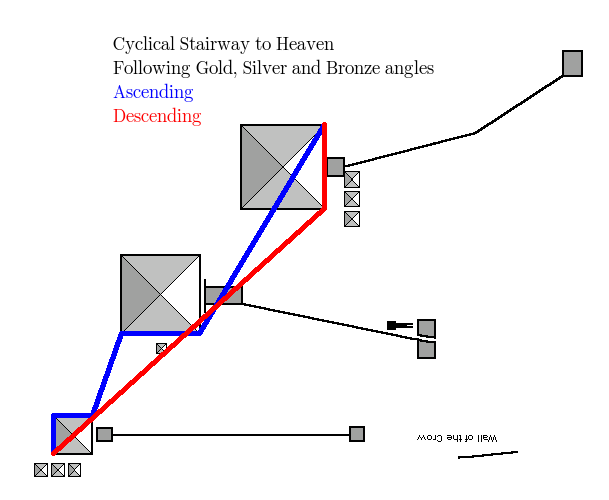 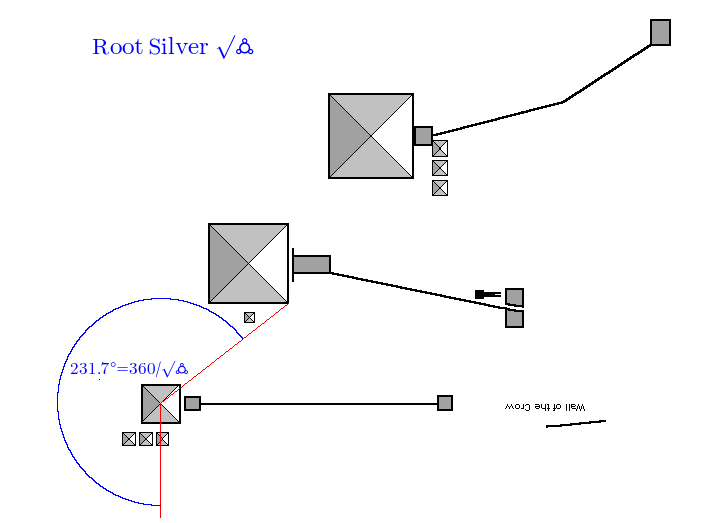 And together with silver: 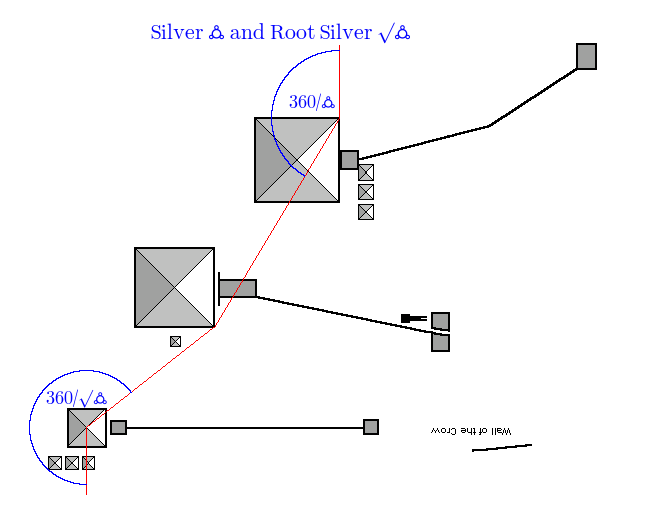 Clearly an almost direct path to the heavens 🙂 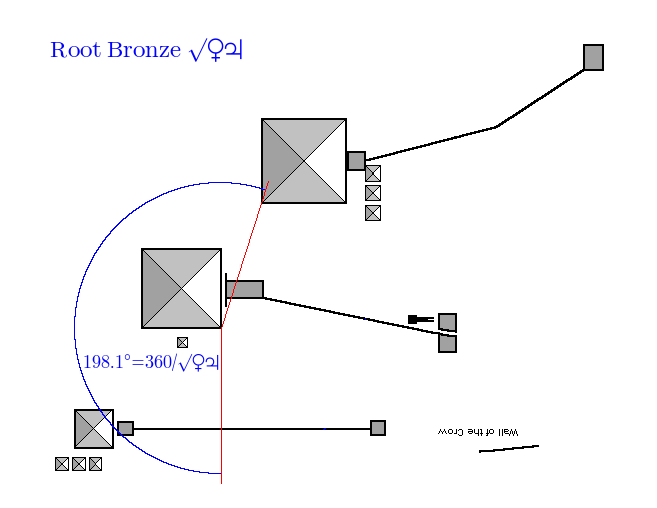 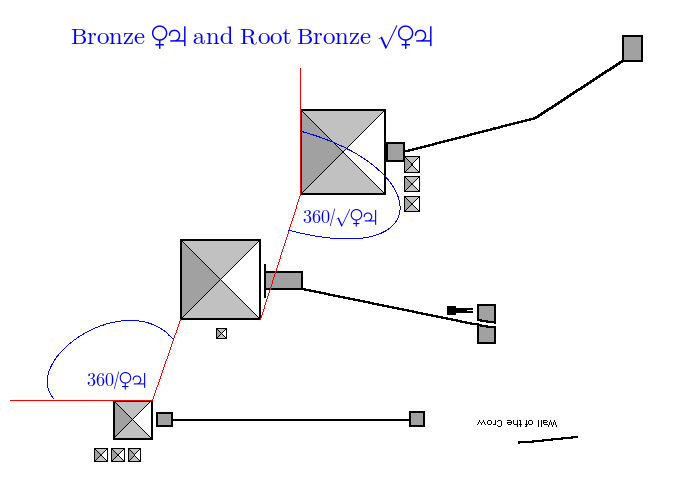 Another quick route to the heavens 🙂

Let’s have a look at how the square roots of primes do: There is evidence that the numbers 7 and 11 were important to the pyramid builders. For example, the height:side ratio of the great pyramid is 7:11. This may be a consequence of the building tools used, which include rods and ropes in lengths of 7 and 11 cubits.

So yes, those numbers in the plan too, in the form of their roots above, and squares below: 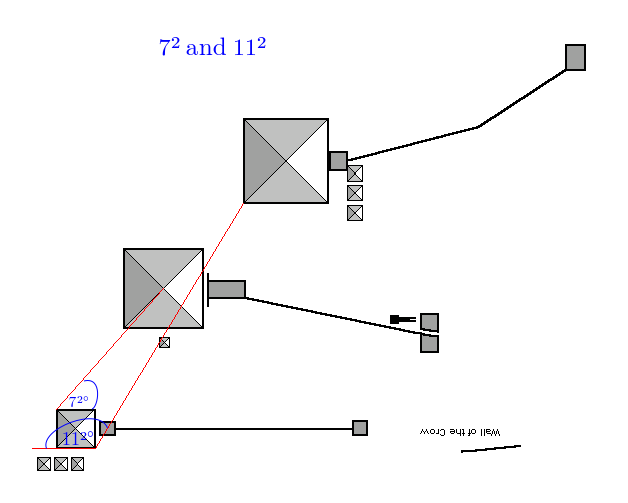 Even that famous prime number 13 puts in an appearance, in both square and root form: Here’s a summary of all the results on this page, arranged from best to worst, in terms of degree error.

2 thoughts on “The Irrational Mathematicians of Giza, Part 1”