Further to my thoughts (which covers some ground covered by others already, so they were not all new ideas) about why the great pyramid is not a tomb, let me speculate on what I think it really was.

But before we get there, it is possible that it may be a tomb, but not in the parts that we know about. There may be another entrance on the west wall (i.e. the one away from the Sphinx), with a separate tunnel and room system like the Bent Pyramid. This possibility is strengthened by the fact that there are different stone types used in the lower courses, which make a triangular pattern, with the current known entrance at the apex of the one on the northern side.

Okay, back on topic. I think the great pyramid was built for a specific purpose, used for that purpose for a while, then for some reason the operators had to “shut up shop” so they sealed things off and left. Presumably the intention was to return at a later date, but they never did, and then Khufu came along and claimed it.

So what was the original purpose? To get there, I need to lay some ideas out, which are separate yet connected, and probably by the end you’ll see where I’m going with the idea.

There is a “hole” in the idea… because it requires that certain shafts or tunnels be in certain locations, and I don’t know if they are. I did ask someone who might know about this, but had no reply. Anyone reading the relevant section (in a later part to this post) who does know, please post a comment. Part of the problem is that various people (explorers and government) have either destroyed (including with gunpowder) or repaired (not always well) various places in the pyramid so it’s hard to know what’s what and what was there originally and what was done later (possibly hiding important things) and what was part of the “shut up shop” process.

I also really do think that there are more tunnels/rooms/whatever in the great pyramid that we have not found yet, and the location of them will either support or destroy this proposal. Time will tell.

So let me start with the first of the lemmas… consider these interior shots: 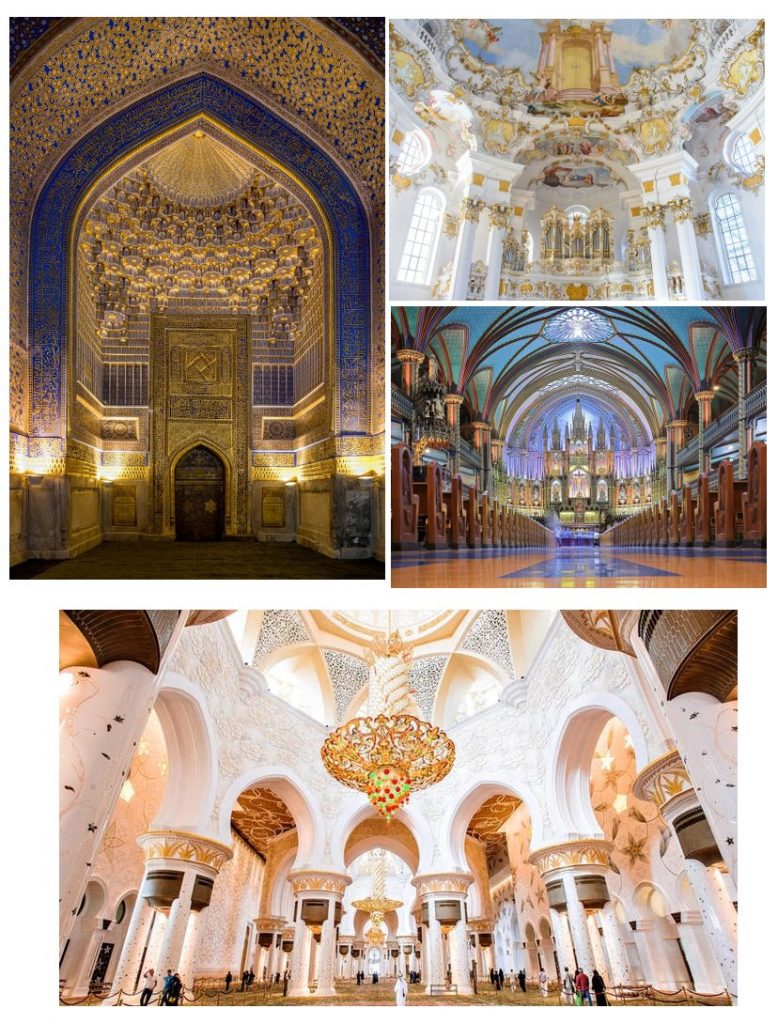 These are all religious buildings of various ages. The point I want to make here is that when it comes to religious buildings, money is not a problem. I suspect (especially for the old ones) that at the time they were built, they were the grandest and most expensive buildings in the community, except for the local political elite’s castle or palace.

This is either because some rich person sponsored the project in the hope of appeasing $Deity and/or getting into $Heaven, or because the local organised religion may have made enough from the faithful to bankroll the project themselves, secure in the knowledge that they would receive a healthy return on their investment from the $True $Believers.

So this is lemma one: When it comes to religious buildings, cost is not an issue, and the Grander the Better.